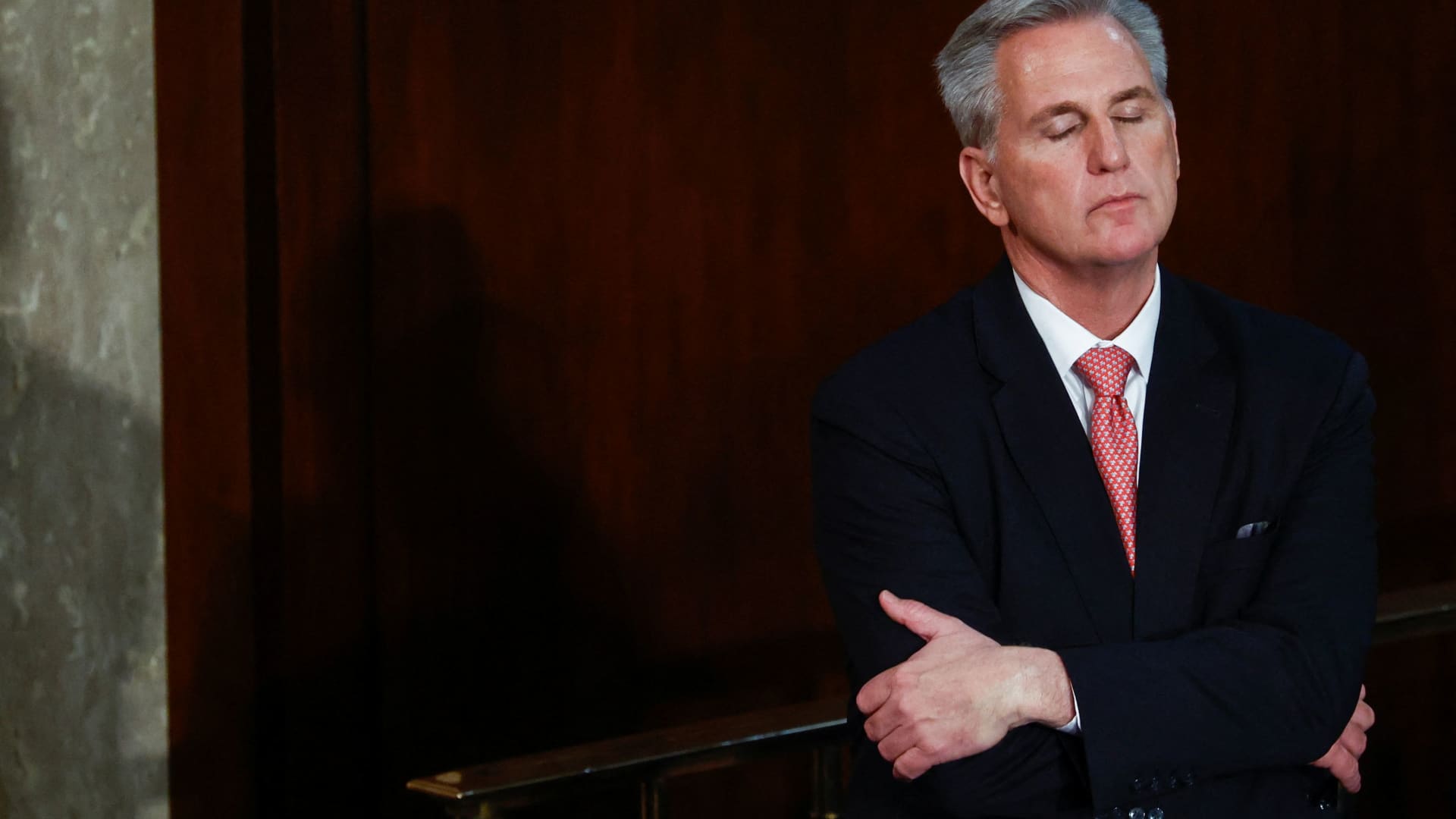 House Republican Leader Kevin McCarthy (R-CA) pumps his fist after voting for himself for the 9th time during a 9th round of voting in the election of a new Speaker of the House on the third day of the 118th Congress at the U.S. Capitol in Washington, January 5, 2023.

Rep. Dan Bishop of North Carolina, Rep. Josh Brecheen of Oklahoma, Byron Donalds of Florida, Andrew Clyde of Georgia and Mike Cloud of Texas have all cast votes for McCarthy, after having supported other candidates in previous votes earlier this week.

The vote is still underway, but the fresh support could breathe new life into McCarthy’s embattled speaker bid.

U.S. House Republican leader Kevin McCarthy (R-CA) talks to reporters as he arrives on the first day of the new Congress at the U.S. Capitol in Washington, January 3, 2023.

“I think you’re gonna see an improvement in the vote today,” McCarthy said, while noting that “unfortunately” some Republican members who would likely be voting for him have left the Capitol.

They include Rep. Wesley Hunt, R-Texas, who flew home this morning to be with his wife and newborn child, NBC reported.

Asked about a possible deal being discussed earlier in the day, McCarthy offered vague details.

“Well, it’s things that we’ve been talking about. It’s got a rule package we’ve talked about over there. I think it makes us only stronger in the long run,” he said.

McCarthy expressed confidence that all House Republicans, including the roughly 20 members who have consistently opposed him, are interested in “getting this done.”

And he pushed back on the notion that the fractured House GOP may not be ready to govern. “No, no, you know, my father always told me one thing — It’s not how you start, it’s how you finish,” he said.

U.S. House Minority Leader Kevin McCarthy (R-CA) (R) talks to Rep. Jim Jordan (R-OH) as Representatives cast their votes for Speaker of the House on the first day of the 118th Congress in the House Chamber of the U.S. Capitol Building on January 03, 2023 in Washington, DC.

In his speech, Garcia emphasized that the vote is not “about Kevin McCarthy,” it’s about all Americans.

While there are rumors of a deal to win over some McCarthy’s holdouts, no firm details have emerged, and McCarthy is not expected to clinch a majority of the votes on this first ballot of the day.

Clyburn opened his remarks by thanking the House clerk, who has unofficially presided over the chamber all week. Clyburn’s thanks prompted a standing ovation from Democrats and Republicans.

House Republican Leader Kevin McCarthy (R-CA) speaks to U.S. Rep. Andy Ogles inside the House Chamber during voting for a new Speaker on the third day of the 118th Congress at the U.S. Capitol in Washington, January 5, 2023.

The U.S. House Clerk Cheryl Johnson gaveled the congregation in session at noon for a prayer before lawmakers begin a historic 12th round of votes to elect a new speaker.

McCarthy is still pursuing the speakership after failing to reach the required 218 votes during the previous 11 voting sessions. Democratic opponent Rep. Hakeem Jeffries of New York is expected to maintain the full backing of his party.

Dark horse candidates could include Florida GOP Rep. Byron Donalds, who was first nominated Wednesday as the first Black Republican contestant for the speaker role, and Oklahoma Republican Rep. Kevin Hern. Hern threw his support behind McCarthy on Thursday.

GOP absences in the House could alter the math for McCarthy

As the House speaker battle drags into its fourth day, at least two Republicans will be absent for at least part of the day, potentially altering the vote math.

A spokesman for Buck confirmed to CNBC that Buck is “expected back in DC this evening,” but not in time for today’s afternoon votes.

Both Hunt and Buck have voted for McCarthy all week, so their absences compound his challenge. If McCarthy fails to win any new votes, he would then be on track to win 199 out of a total of 431, presuming Rep. Victoria Sparz again votes “present,” but doesn’t cast a ballot.

With 431 total voting members, the new magic number to win the speakership becomes 216. McCarthy would still fall short, but it would potentially shrink the number of holdouts he would need to win.

But it would also put Democratic Minority Leader Hakeem Jeffries of New York, who has won every Democratic vote all week, just four votes away from winning the speakership.

McCarthy’s chances improve after GOP negotiations, but still no deal

House Republican Leader Kevin McCarthy (R-CA) places his hand over his mouth as he stands inside the House Chamber during voting for a new Speaker on the third day of the 118th Congress at the U.S. Capitol in Washington, U.S., January 5, 2023.

McCarthy was optimistic during a GOP-wide conference call Friday morning, but the fractured party still hasn’t reached a deal to hand the Republican leader a win, NBC reports.

“I’m not telling you we have an agreement,” McCarthy said, according to two people on the call. “We’re in a good position and having meetings.”

Texas Rep. Chip Roy currently leads a faction committed to bringing McCarthy more votes, though the exact number they have swayed is not known. Though a win is not guaranteed, the party leader has reportedly inched closer toward the speakership.

Speaker battle paralyzes all activity in the House

The chair of the Speaker of the U.S. House of Representatives sits empty as the House embarks on another round of voting for a new House Speaker on the second day of the 118th Congress at the U.S. Capitol in Washington, U.S., January 4, 2023.

The longer the infighting on Capitol Hill delays the election of a new House Speaker, the more havoc it will wreak on the federal government.

While it doesn’t necessarily pose an imminent threat to the U.S. economy, it paralyzes all action on the Hill. That could be especially detrimental if the nation were to face a major catastrophe that needed quick congressional votes or approval on emergency spending, as it did in the Sept. 11th attacks or during the early days of the Covid-19 pandemic.

As of Friday, the chamber could not pass legislation or respond to a national emergency.

Representatives-elect across the country cannot set up their offices or provide formal services for constituents until they are sworn into the new Congress by the speaker. That includes help with receiving federal benefits or recovering missing payments from the government.

Without a speaker, the House can’t vote on a rules package governing the new Congress. The stalemate has stopped Republicans from installing their committee chairs, holding hearings or conducting regular oversight of the executive branch and industry.

If the House does not pass rules by Jan. 13, committee staff could start to lose pay, according to guidance sent to those panels reported by Politico.

Democrats also emphasized that the absence of a speaker was threatening U.S. national security by keeping members of Congress from accessing classified intelligence that is only available to lawmakers after they have taken the oath of office, which none of them can take without a speaker.

US Republican Representative from California Kevin McCarthy arrives as the US House of Representatives continues voting for new speaker at the US Capitol in Washington, DC, January 4, 2023.

U.S. Rep.-elect Byron Donalds (R-FL) watches proceedings in the House Chamber during the third day of elections for Speaker of the House at the U.S. Capitol Building on January 05, 2023 in Washington, DC.

Donalds, who was the only Black candidate, was first nominated on Wednesday while Rep. Lauren Boebert, R-Co., offered Hern’s name Thursday. Hern chairs the powerful Republican Study Committee while Donalds sat on the powerful budget and oversight committees during the last congressional session.

Both fell far short of gaining a competitive share of the votes — Donalds and Hern grabbed 12 and 7, respectively, compared with 200 for McCarthy and 212 for Democratic challenger Rep. Hakeem Jeffries — but the final tally placed the coveted role further from McCarthy’s grasp. A 12th round of voting is expected to take place Friday at noon.

U.S. House Republican Leader Kevin McCarthy (R-CA) gets a pat on the back from one of his House colleagues prior to a fourth round of voting for a new House Speaker on the second day of the 118th Congress at the U.S. Capitol in Washington, U.S., January 4, 2023.

The insurrection by a violent mob of then-President Donald Trump’s supporters forced lawmakers in the House and Senate to flee their chambers, impeding the transfer of power from Trump to now-President Joe Biden.

Community faith leaders gather for a prayer vigil on the second anniversary of the January 6 attack on the Capitol on January 6, 2023 in Washington, DC. Speakers called for an end to Christian nationalism and denounced political violence.

McCarthy had initially blamed Trump for the attack, saying the president “bears responsibility” even as he opposed Democrats’ efforts to impeach Trump for a second time. But McCarthy soon walked back that criticism, and that same month visited Trump and posed with him for a smiling photo.

A man dressed as Uncle Sam, who’s a regular attendee of events held by former President Donald Trump, stops to pray near community faith leaders during a vigil on the second anniversary of the January 6 attack on the Capitol on January 6, 2023 in Washington, DC.

Trump has in recent days urged the faction of House Republican defectors to back McCarthy for speaker. But although the group of far-right lawmakers are highly supportive of Trump — GOP Rep. Matt Gaetz even voted for Trump for House speaker in two of McCarthy’s failed votes — they have not acquiesced to his demand.

Some Democrats are linking the current Capitol chaos to the radicalism that led to the 2021 riot.

“Unfortunately, the utter pandemonium wrought by House Republicans this week is just one more example of how the extreme fringe of their party, led by election deniers, is pulling them further into chaos and making it impossible for them to govern,” Senate Majority Leader Chuck Schumer, D-N.Y., said in a statement Friday morning.

Biden is set to attend a ceremony at the White House at 2 p.m. ET marking the two-year anniversary of the insurrection. He will be joined by Vice President Kamala Harris and second gentleman Doug Emhoff.